Shop now, pay later with Klarna - check it
Our bestseller 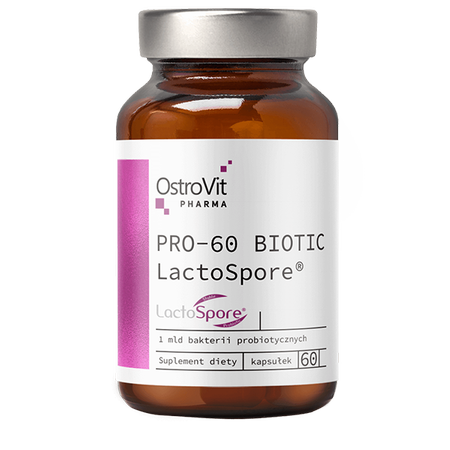 OstroVit Pharma PRO-60 BIOTIC LactoSpore is a dietary supplement in capsules which contain live probiotic bacteria cultures – Bacillus coagulans MTCC 5856 LactoSpore, patented by Sabinsa. Our probiotic lets you keep the balanced gut microflora, and its efficacy has been confirmed through clinical tests. Probiotic bacteria strains contribute to mitigation of symptoms arising from wrong intestinal flora. Are you looking for the probiotic which can support your bowels and serve as a reliable protection in an antibiotic therapy? Choose OstroVit Pharma PRO-60 BIOTIC LactoSpore!

Bacillus coagulans, formerly referred to as Lactobacillus sporogenes, is good bacteria which remain stable at high temperatures. They were discovered in 1932 and ever since has been subject to numerous studies which demonstrate that they are effective in supporting health and good mood. The probiotic in the form of spores can survive and multiply in the digestive tract. Cultures produce only a beneficial form of the lactic acid L(+).

Bacillus coagulans strays foster general health of a man, as well as perform well in the antibiotic therapy. Clinical tests confirm that our lactic acid bacteria can:

Live bacteria cultures LactoSpore have been available on the market for over 20 years and prove to be highly stable in processing and storing, thanks to which they do not become ineffective when enclosed in the capsule. They are able to survive in gastric discharges and bile, and therefore safely reach bowels. They stop in the digestive tract in which they product a lactic acid and other substances hindering growth of pathogenic bacteria.

LactoSpore bacteria have been marked as FDA GRAS, which means that the American Food and Drugs Administration considers them as safe in general use. The stray proves effective in mitigating symptoms of the irritable bowel syndrome.

OstroVit Pharma PRO-60 BIOTIC LactoSpore dietary supplement is a set of 60 capsules which contain MTCC 5856 stray. One portion of the supplement is 1 x 109 CFU, that is as many as one billion probiotic bacteria!

Use 1 portion (1 capsule) a day, after a meal.The product intended for adults.

Do not exceed a recommended daily intake. The dietary supplement must not substitute a diversified diet. Balanced eating habits and healthy lifestyle are recommended. Do not use in case of allergy to any of the product ingredients. The product must not be used by children, pregnant women and breastfeeding mothers. Keep out of reach of small children.