New products on offer - check it
Our bestseller 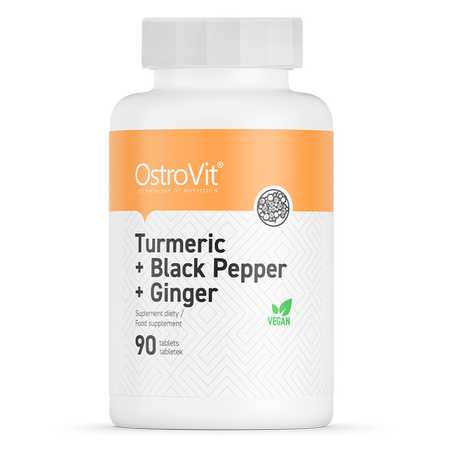 Curcumin is a natural chemical compound extracted from the spice known as Curcuma. The compound is used as a yellow-orange food dye and as a very strong antioxidant from the group of polyphenolic compounds exhibiting anti-inflammatory activity and the ability to increase the number of antioxidants produced by the body. Its bioavailability for our body improves the presence of piperine, which is why it is so important that both substances are taken together. Curcumin is very often used as a support in the treatment of dry eye syndrome, conjunctivitis, glaucoma and ischemic retinopathy. Many studies indicate that the curcumin contained in curcumin may support neurodegenerative diseases such as Alzheimer's or Parkinson's disease.

Black pepper - is a spice used practically all over the world to give dishes a distinctive taste and spice. The alkaloid it contains - piperine accelerates the metabolism of individual substances. Piperine contained in the fruits of black pepper enhances the thermogenesis process - i.e. the process of producing heat, during which the body burns calories, as well as the process of lipolysis via adrenergic receptors, i.e. the oxidation of adipose tissue. Piperine stimulates sensory endings in the digestive tract, thereby increasing the secretion of gastric juice, and this helps to improve digestion. Piperine also contributes to the absorption of some vitamins and minerals, e.g. selenium, B vitamins and beta-carotene. In addition, it facilitates the absorption of coenzyme Q10 and increases the absorption of resveratrol or curcumin. Piperine may also increase the absorption of some drugs.

Ginger - is a spice widely known all over the world, which contains several ingredients with antiviral activity, which is why ginger has been used as one of the home methods for treating colds and infections for years. Its bactericidal and anti-inflammatory properties mean that it can be used as an aid in the treatment of colds and flu. Ginger also has disinfectant properties. The strong warming effect of ginger can be used to cool the body.

Take 1 serving (1 tablet) a day. The product is intended for adults.

Do not exceed the recommended daily dose. Do not use the product as a substitute (replacement) for a varied diet. Recommended are balanced diet and healthy lifestyle. Do not ingest if you are allergic to any of the ingredients. Children, pregnant or nursing woman must not take the product. Keep out of the reach of children.