New products on offer - check it 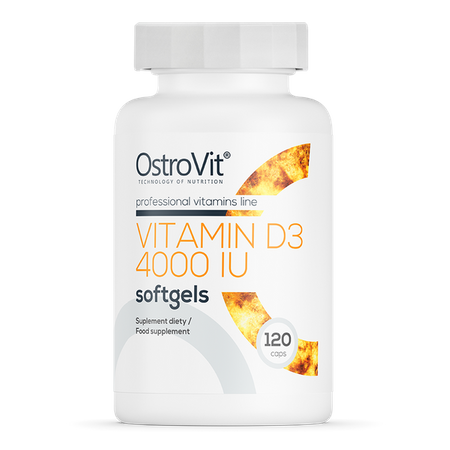 OstroVit Vitamin D 4000 IU is a set of 120 soft vitamin D-rich capsules in the form of cholecalciferol. The product is intended to all those who wish to boost their immunity and take care of correct operation of their organism. A large dose of vitamin included in the capsule makes the supplement perform perfectly in persons suffering from deficiency of this valuable substance. Do you want to avoid sicknesses, strengthen your bones as well as prevent diabetes and tumors? Choose Vitamin D 4000 IU 120 dietary supplement from OstroVit!

Who should use OstroVit Vitamin D 4000 IU supplement?

Vitamin-D deficiency is one of the most common and simultaneously most frequently ignored shortages of nutrients in human organism. Still few people realize that too low level of vitamin D may lead to a series of health issues, for example growth of diabetes, hypertension, metabolic disorders, tumors and infections.

Most part of vitamin D reaches your organism through sunlight, this is why its deficiency is most frequent in autumn and winter, when days are short, and the sun weaker. The source of vitamin may also be food, in particular fat fish, yolk and mushrooms. If you also suffer from vitamin D deficiency, choose OstroVit Vitamin D 4000 IU supplement which:

OstroVit Vitamin D 4000 IU capsules include as many as 4000 international units of vitamin D in the form of cholecalciferol, thanks to which they are recommended primarily to all seniors aged 75 upwards. Their composition is fortified with olive oil which substantially increases absorption of active ingredient. One package of the supplement is 120 capsules and this is sufficient for 4 months of regular supplementation.

Major features of our supplement:

Healthy adults over 75 years of age - 1 capsule daily with a meal.

It is advisable to perform a 25-(OH) D blood test and consult the doctor or pharmacist before use.

Do not exceed the recommended daily dose. Do not use the product as a substitute (replacement) for a varied diet. Recommended are balanced diet and healthy lifestyle. Do not ingest if you are allergic to any of the ingredients. Children, pregnant or nursing woman must not take the product. Keep out of the reach of children.