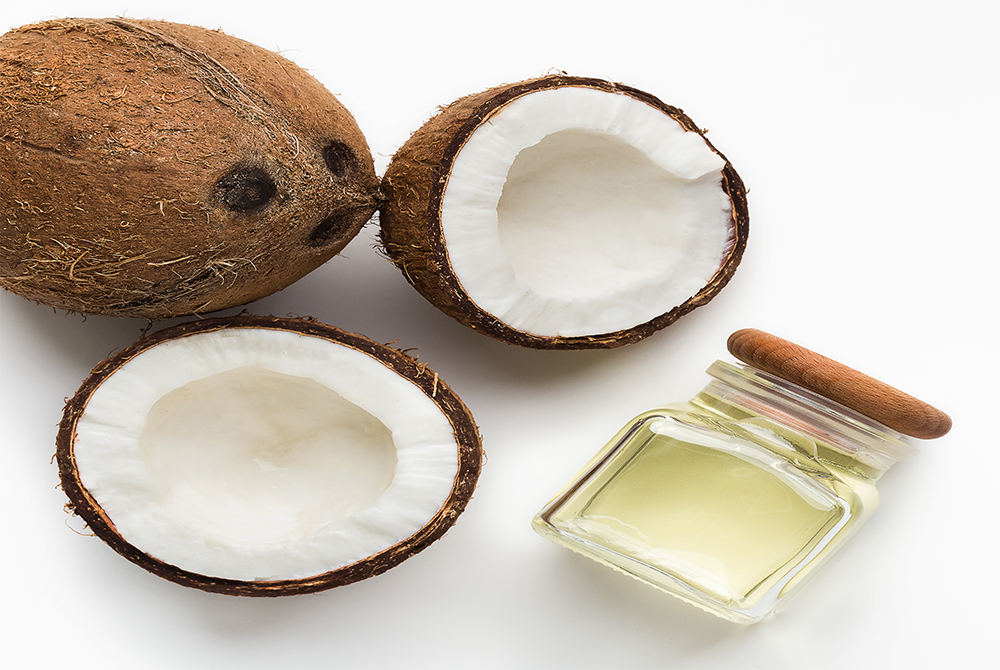 Coconut oil is one of the food products which is highly controversial. Scientific studies concerning its effects on the cardiovascular system conflict with each other. Supporters of coconut oil rely on reports that refer to the properties of some of its components rather than the oil itself. Opponents emphasise the high content of saturated fatty acids, without thinking about the type of fatty acids. It is known that coconut oil has beneficial effects on hair and skin with external application. But is coconut oil healthy?

Coconut oil is made from the flesh of the ripe nuts of the coconut palm tree. Coconut oil has been consumed in tropical countries for thousands of years and it has become popular in the United States and Western Europe recently. Its production accounts for 2.5% of global vegetable oil production. More than 70% of global coconut oil production comes from the Philippines and Indonesia.

Refined coconut oil undergoes additional processing to make it more suitable for cooking. Numerous technological processes make it more durable, it has a higher smoke point (204-232°C), making it ideal for long frying at high temperatures, but it also loses its coconut taste, aroma and some of its antioxidant activity. There is less vitamin E and polyphenols in refined coconut oil.

Coconut oil is one of the best oils for hair. It is a result of its easier absorption into the hair compared to other oils. This effect comes from its structure and content of fatty acids with short, straight chains. Coconut oil protects undamaged, bleached, chemically treated and UV-exposed hair from protein loss.

Is coconut oil better to use on wet or dry hair? The effects are visible both on dry and wet hair. Applying coconut oil to dry hair before shampooing reduces the opening of the hair cuticles and the absorption of water by the hair, making it less prone to damage. What is more, hair is damaged most easily when it is wet. If you apply coconut oil to your hair after shampooing, your hair will be smoother and softer and you will experience less friction when combing and styling your hair. 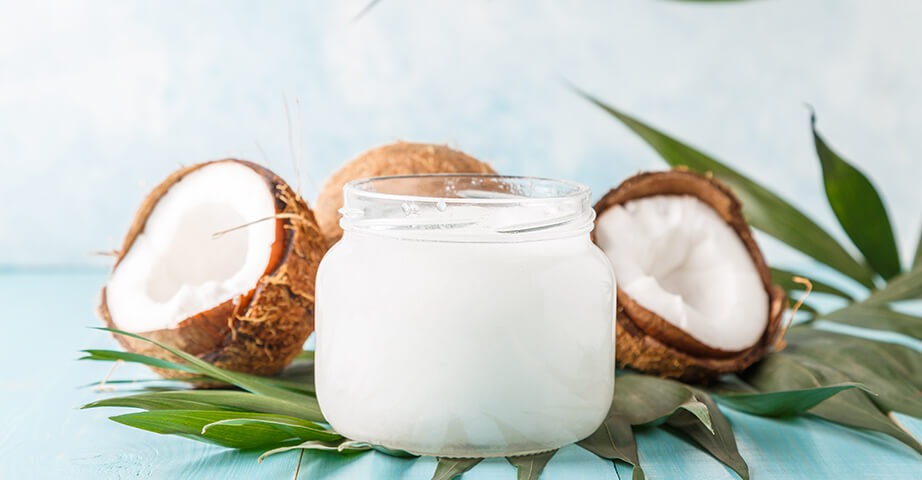 Coconut oil can be used on the face depending on your skin type. It has antibacterial, anti-fungal and moisturising properties, which makes it suitable for skin problems. Based on reviews from people who use coconut oil on their face and natural skincare experts, it has shown to:

What does science say about the effectiveness of using coconut oil on the skin? It contains nearly 50% of lauric acid, which has the strongest antimicrobial properties among fatty acids. As a result, coconut oil can be used to cleanse the face, prevent eczema and skin infections. Lauric acid works efficiently against Propionibacterium acnes bacteria that are responsible for eczema with inflammation. To get the best results, coconut oil should be applied directly to the skin, in areas where acne is present.

Coconut oil can be effective not only for the face but the skin in general. In fact, it exhibits powerful anti-inflammatory properties with external application. Chronic inflammation is a major contributor to many different skin conditions, including psoriasis, contact dermatitis and eczema. Applying coconut oil to skin lesions can alleviate these conditions. In a small scientific study, coconut oil has been proven to reduce dryness, itching and skin sensitivity in people with eczema. Moisturising and anti-inflammatory properties are key here. Coconut oil also provides a good protective barrier, reduces the access of bacteria to the damaged epidermis, accelerates wound healing and participates in maintaining the overall skin integrity. It should be applied directly to skin lesion

Supporters of the use of coconut oil say that it accelerates fat metabolism due to its unique composition of fatty acids. Is it true? Where does this theory come from? Coconut oil contains medium-chain fatty acids (MCT), which are metabolised differently than long-chain fatty acids common in food. They are broken down without the involvement of bile, absorbed directly in the small intestine into the bloodstream and transported to the mitochondria, where large amounts of energy are released from them. This property means that MCT group fats really affect accelerating lipid metabolism. According to scientific studies, their consumption promotes weight control and may help with dieting.

To sum up, coconut oil is not the same as MCT. There are only 15% MCTs in coconut oil and that is not enough to talk about a beneficial effect on fat burning. 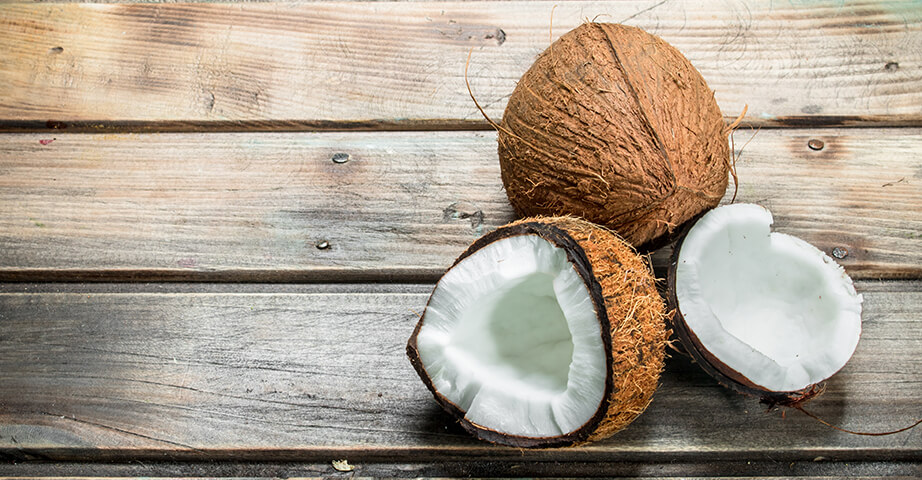 Another issue that gathers various opinions is the effect of coconut oil on lipidogram and the risk of heart disease. Opponents of coconut oil point out that it primarily contains saturated fatty acids. Supporters refer to studies showing that coconut oil lowers LDL levels and raises HDL. According to theories from the 1980s, consumption of saturated fatty acids increases the risk of atherosclerosis and heart disease by raising blood cholesterol levels. Today we know that this relationship is not so simple or obvious, and too low cholesterol levels are more dangerous to health than too high ones. The ratio of LDL to HDL is more important for the cardiovascular system than the cholesterol concentration itself. It is also impossible to clearly state that every increase in cholesterol content is equally harmful to health and that every saturated fat has an atherosclerotic effect.

Nowadays, it is claimed that coconut oil is neither good nor bad for the cardiovascular system. A meta-analysis of studies on the effects of coconut oil consumption shows that it raises LDL levels by 8.6% and HDL levels by 7.8%, which means that their ratio remains almost unchanged. Coconut oil raises total cholesterol levels more than vegetable oils rich in unsaturated fatty acids, but less than butter and lard.

According to a survey conducted by the American New York Times, 72% of the population considers coconut oil to be healthy fat. Only 37% of nutrition experts have the same opinion. Coconut oil has a very good PR, but at the same time, the results of scientific studies on various aspects of its effects are contradictory. Certainly, the properties of coconut oil can be used for external application on the skin and hair, also it is a good alternative to frying at high temperatures. Nevertheless, should coconut oil be considered a superfood among oils? Rather not. Of course, coconut oil is much healthier than hydrogenated vegetable oils, probably a little healthier than butter and lard, but it cannot be put on the same level as olive oil or fish oil. It is an ordinary foodstuff that is neither healthy nor unhealthy.

In many cases, clinical and observational studies on humans are needed to confirm the claims concerning coconut oil. Available results are largely based on animal, in vitro or purified medium-chain fatty acid studies, not coconut oil.