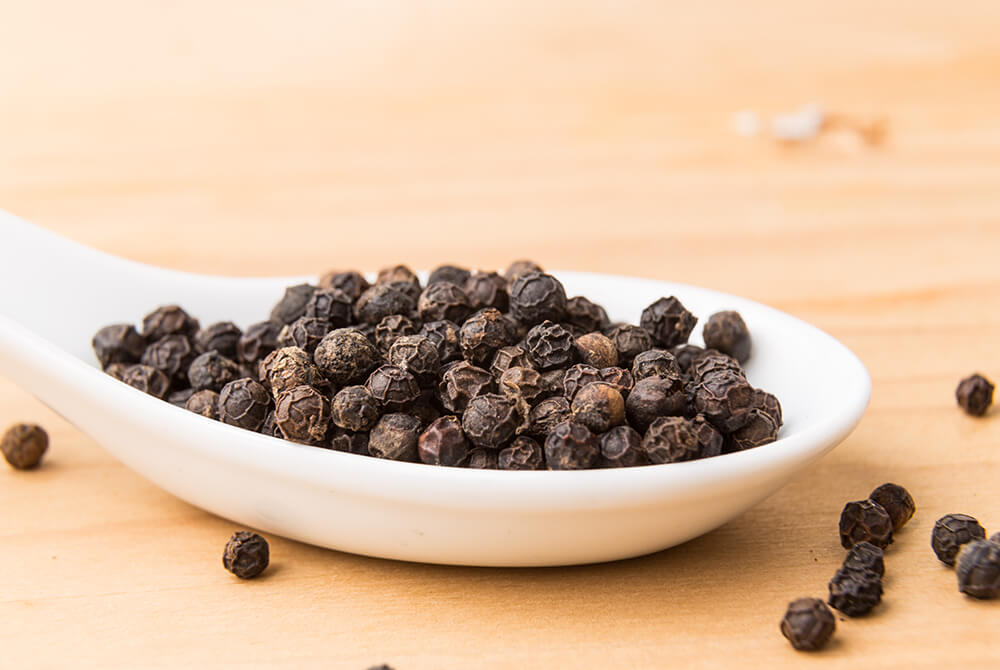 Piperine belongs to the group of alkaloids. It is the most important active ingredient of different pepper varieties and is responsible for its characteristic, spicy taste. Most piperine is found in black pepper (Piper nigrum). Its amount varies from 2 to 9% of the weight of peppercorns, depending on climate, area and pepper growth conditions. Black pepper, thanks to its piperine content, has become a worldwide used spice, food preservative and in some regions also a plant important in folk medicine.

Piperine is a chemical compound with the molecular formula C17H19NO3. It can also be found under the name 'bioperine'. Piperine has a sharp bitter taste. In its pure form, it forms yellowish crystals which are insoluble in water.

Properties and traditional uses of piperine

Folk medicine attributes many properties to piperine. More precisely, these properties are attributed to black pepper, but nowadays, thanks to scientific progress, it is known that piperine is primarily responsible for them. Piperine-rich black pepper is an important ingredient in Indian Ayurveda. It is found in recipes for more than half of Ayurvedic preparations. Chinese medicine also benefits from its properties. Black pepper is traditionally used as a remedy for fevers, gastrointestinal diseases, lung diseases, bronchitis, asthma, headaches, muscular and rheumatic pains, viral and bacterial infections and to improve blood circulation.

One of the most popular uses of piperine is the acceleration of fat burning. What is the scientific world's opinion on this subject? Does piperine really facilitate weight loss?

Scientific studies conducted so far (mainly on animals) confirm the commonly repeated opinion that piperine may increase the effects of weight loss. Piperine significantly influences the regulation of genes responsible for fat metabolism and formation of fat cells. Studies have shown that it inhibits adipocyte differentiation (formation of new fat cells), fat accumulation and accelerates lipolysis (breakdown of fat), especially visceral fat. It means that piperine can support the weight loss process. Piperine has been proven to inhibit the accumulation of belly fat more effectively than subcutaneous fat./p>

You should not expect that adding a pinch of black pepper to your dinner or a cocktail will have a slimming effect. Unfortunately, such headlines can be found online. The average dietary intake of piperine is 0.5 mg per day. Therefore, it is an amount significantly less than that which has the potential for supporting weight loss.

Piperine may prove to be a substance with a very wide range of positive health effects. Currently, most of the available evidence for piperine's effectiveness comes from animal studies, but these are very promising. So far, scientific evidence has certainly proven that:

Piperine may have anti-allergic effects

Studies conducted on mice have shown that piperine can have an anti-allergic effect. Administration of piperine reduces allergic rhinitis, sneezing and red eyes. The action of piperine is based on the alleviation of nerve end allergy caused by histamine released in response to the antigen-antibody reaction. The second anti-allergic mechanism uses reduced nitric oxide (NO) levels due to decreased migration of eosinophils (a type of immune cell) into nasal epithelial tissue. 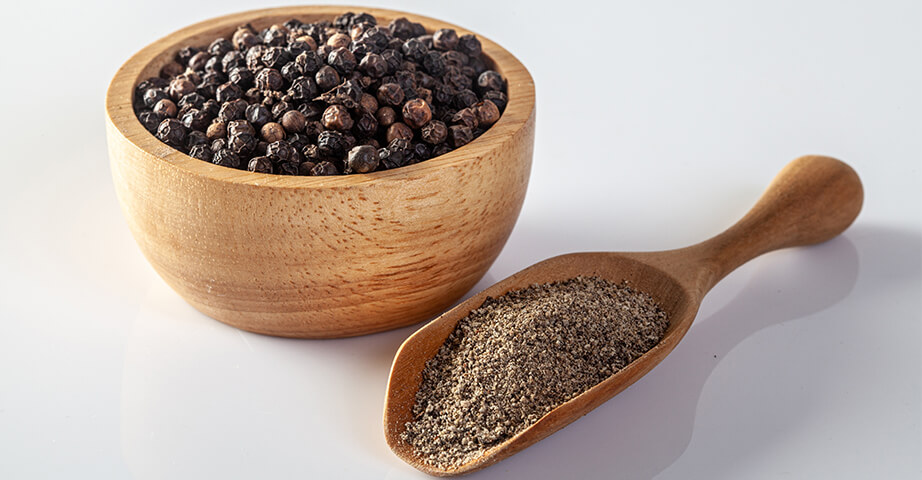 Piperine administration can alleviate inflammation, redness and damage to alveoli and bronchioles of the lung. In one study in an egg albumin-induced asthma model, piperine administration reduced eosinophil infiltration and airway hyperresponsiveness by inhibiting T-lymphocyte activity and Th2 cytokine production.

Piperine may have anti-diabetic effects

Animal studies show promising results for the use of piperine in the prevention and treatment of diabetes. Piperine may improve insulin and leptin sensitivity, thus having a positive effect on the prevention of diabetes and obesity. Taking piperine for at least 14 days can result in lower blood glucose levels due to the more efficient transport of glucose into cells, where it is used as an energy source. However, the dose of piperine must be chosen precisely, as too high a dosage can cause the opposite effect. In addition, piperine increases the effectiveness of metformin - the drug chosen as the first option in diabetes before the use of insulin. Combining piperine with metformin may allow using lower doses of the drug.

Piperine has shown neuroprotective effects in various fields. It may be helpful in the fight against Alzheimer's disease, in which neuronal death, deficiency of the acetylcholine neurotransmitter and memory loss occur. Studies in rats have shown that piperine can increase the density of neurons in areas of the brain responsible for memory, reduce the oxidation of lipids, which are a very important component of nerve cell membranes, and consequently improve memory abilities. Piperine may produce similar effects to the drug used to treat Alzheimer's disease - Donepezil.

Piperine may have a positive effect on reversing changes in the brain that lead to Parkinson's disease as well as improved balance and movement coordination. Such effects are due to the antioxidant and anti-inflammatory activity of piperine.

It has been proven that piperine can alleviate the effects of environmental and social stress as well as act as an antidepressant. Administration of piperine to rats resulted in lower blood levels of cortisol (the so-called stress hormone), improved behaviour and increased expression of BDN, a deficiency of which is observed in depression. Researchers conclude that piperine may reverse the effects of stress in a similar way to antidepressants.

Other health-promoting effects of piperine

The available scientific literature suggests that piperine may: 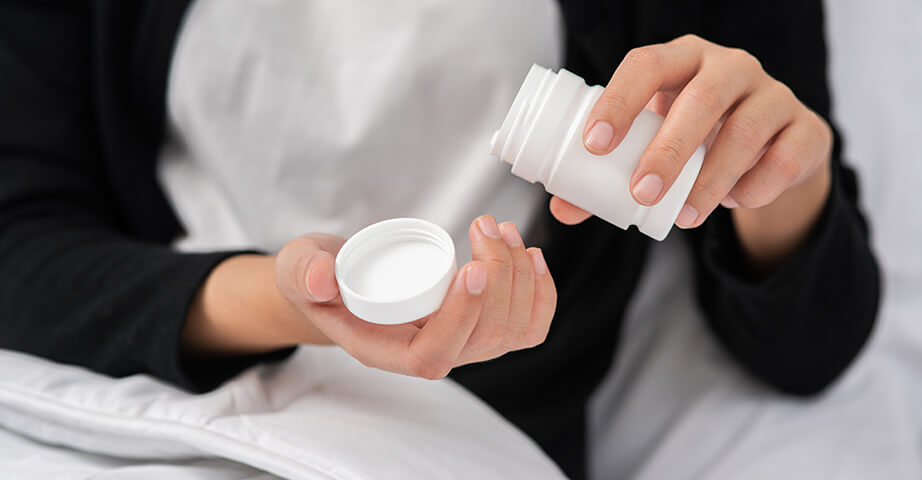 Piperine taken as a dietary supplement in low doses appears to be safe for health and does not cause side effects. However, at high doses (10 mg of piperine per kilogram of body weight per day), studies in rats have reported toxicity leading to impaired fertility among men.

Piperine is known as an agent that increases the bioavailability and absorption of many natural active substances and drugs. Although this is generally considered to be an advantage of piperine, it can be harmful when used with certain preparations. When taking medications, e.g. for chronic diseases, it is essential to check whether piperine interacts with them before starting supplementation.

Which piperine should I choose?

There are many piperine preparations available on the market. Piperine forte, piperine fast, piperine max... These names suggest better and faster action than "ordinary" piperine. However, it is important to remember that a dietary supplement can be called by any name, so the catchy word "forte" on the package is not a guarantee of the desired effect. Nothing excuses us, consumers, from checking the ingredients. This is particularly the case with dietary supplements, which appear in abundance on pharmacy shelves and the internet. A guarantee of purchasing a good preparation is a trustworthy producer and standardisation. What is standardisation? A supplement standardized for the presence of an active ingredient is a product in which the manufacturer not only states on the packaging that the supplement contains black pepper extract but also how much of the extract contains the active ingredient (in this case, piperine). The standardisation is expressed as a percentage and as a unit of mass, e.g. mg or μg. Preparations with piperine contain black pepper extract standardised to 95% of piperine.

There are no official recommendations for the use of piperine, but the doses used in scientific studies estimated to be effective usually range from 5 to 20 mg per day. Therefore, we can consider that a good piperine supplement should not contain less than 5 mg of piperine per tablet. It doesn't matter if a piperine supplement has a catchy "forte" in its name. The crucial thing is the amount of the active ingredient that is believed to work