Fenugreek for diabetics, for hair and more. What does it help? 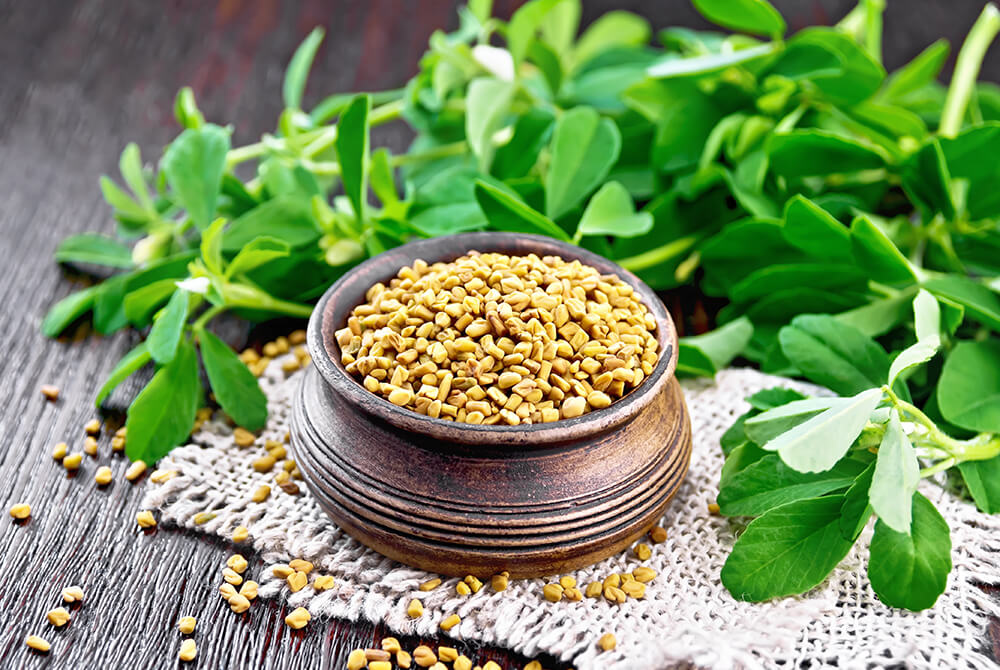 Fenugreek is a plant, which seeds are not only an important spice in many world cuisines but, especially, are a valuable medicinal raw material. The fenugreek properties described in Ayurveda more than four thousand years ago have been confirmed by modern science. What do fenugreek seeds help for? How to use fenugreek seed? Does fenugreek help the hair?

Fenugreek - what is worth knowing about it?

Fenugreek (Trigonellafoenum-graecum) is a plant from the bean family. Its fruits are brown pods which are 15-20 cm long and each contains around 15 yellow, hard seeds with a strong aroma. They are similar to dried corn. The ground seeds are used as a spice. Fenugreek is used in many cuisines around the world. You will find it in rice dishes in Iran, aromatic cheeses in Switzerland, syrups in Germany, bread cakes in Egypt, in Indian curries, in garam masala mixes and some regions of Africa use roasted fenugreek seeds as a coffee substitute.

However, fenugreek is not only used as an aromatic addition to dishes but primarily as a health-promoting plant. The fenugreek leaves and seeds are the raw material that supports the organism. The medicinal use of fenugreek is rooted in Indian Ayurveda, which dates back to around 2500 BC. It is also significant in traditional Iranian medicine, where it is used as a support for various eye conditions and as a blood sugar-lowering agent. In Ancient Egypt, fenugreek was used in incense and to embalm mummies, in Chinese medicine for strengthening and reducing leg swelling, and in India for stimulating lactation, indigestion and baldness.

Naturally grown fenugreek is present in the Mediterranean region - in North Africa, southern Europe, Turkey, as well as in Pakistan, India and China. As a forage crop, it is cultivated in Asia and Europe. Increasingly, fenugreek is also being grown as pharmaceutical raw material.

Thanks to a set of bioactive components, fenugreek seeds exhibit health properties on several levels. They have hypoglycemic, carbohydrate-regulating, hypolipidemic, anti-inflammatory, antimicrobial, protective effects on the skin, mucous membranes, liver and nervous system.

Fenugreek for the hair

The chemical composition of fenugreek makes it clear that its application for the hair can provide the desired effect. Fenugreek is a source of protein - a building material of the hair as well as iron, which is essential for hair growth. In addition, it contains numerous bioactive components from the groups of saponins and flavonoids, which promote healthy hair growth through their antioxidant and antifungal effect. There are not many recent studies that have analysed the efficiency of fenugreek seeds on hair, however, the results of the available ones demonstrate that it is worth taking a closer look at the benefits of fenugreek seeds on hair. In one study, participants were given 300 mg of fenugreek seed extract orally, every day, for 6 months. The other group received a placebo. 80% of the people in the fenugreek seed supplement group reported that their hair was stronger, thicker and grew more quickly.

How to use fenugreek seed for hair? To make supplementation effective, you should take at least 1.2 g of fenugreek seeds or 300 mg of seed extract every day for several months. However, it is worth remembering that not everyone will find fenugreek seed beneficial for their hair. It all depends on individual reasons for a weak or falling hair problem. 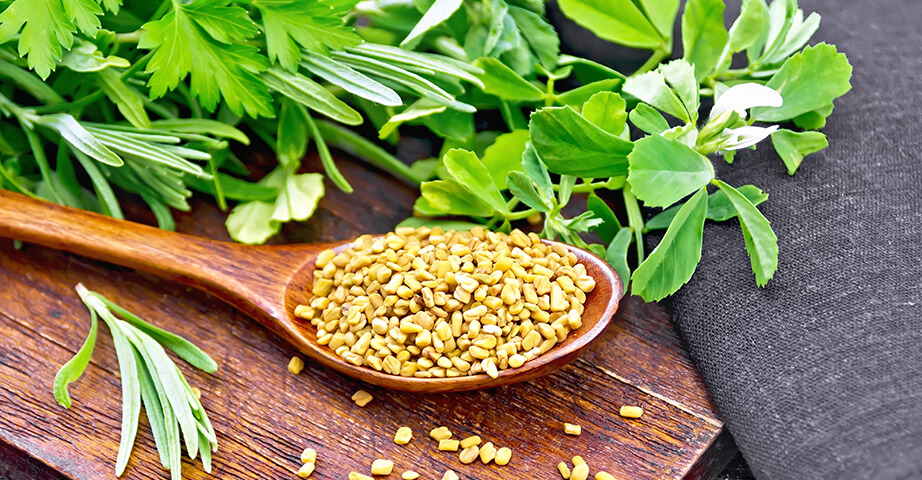 Fenugreek rub - what does it help?

Fenugreek has been one of the most frequently used plants for skin problems, including the scalp for ages. The fenugreek plant was used for dry, sensitive scalp, itching, flaking and various types of dandruff as well as for excessively oily scalps. Modern science has confirmed that fenugreek has anti-inflammatory, moisturising, anti-fungal, soothing and wound-healing properties. It makes fenugreek a great natural remedy for healing the scalp and strengthening the hair. According to user reports, the first effects are visible after one month of regular use - significantly more new hair (so-called baby hair) grows and the hair is also thicker.

How to prepare a fenugreek hair rub? The recipe is very simple. Pour 100 ml of boiling water over one teaspoon of ground fenugreek and leave it covered for 15 minutes. Strain after it has cooled down. Apply the strained liquid to your scalp using a pipette or syringe without a needle and rub it in with calm, circular moves using your fingers. This will also be a great, relaxing massage for your head.

The antidiabetic properties of fenugreek are the best studied of its potential health-promoting activities. The hypoglycaemic effects are a result of several mechanisms. Fenugreek contains the amino acid 4-hydroxyisoleucine, which increases glucose-induced insulin release from the beta cells of the pancreatic islets. It also has the effect of increasing glucose uptake and insulin sensitivity. Another benefit of fenugreek is related to its effect on enzymes involved in metabolism. Fenugreek has properties that reduce glycolysis (conversion of glucose into pyruvate), lipogenesis (formation of fats) and regulate excessive gluconeogenesis (formation of glucose e.g. from amino acids, lactate).

We should not forget the ingredient that is present in fenugreek seeds in the greatest quantities and is largely responsible for the hypoglycaemic properties. It is a galactomannan, a soluble fibre, a mucilaginous substance that swells in water. It is recommended to drink ground fenugreek in the form of a gruel. Fenugreek galactomannan delays gastric emptying, slows down digestion and absorption of nutrients and thus delays and flattens out the postprandial rise in blood glucose levels.

The anti-diabetic properties of fenugreek are evident when using at least 5 g of seeds daily. You can use the ground seeds and prepare a gruel. How to make fenugreek gruel? Mix 1 tablespoon of ground seeds with 1 cup of water, then simmer for 10-15 minutes on a low heat, stirring from time to time. Fenugreek gruel should be drunk 3 times a day before meals. 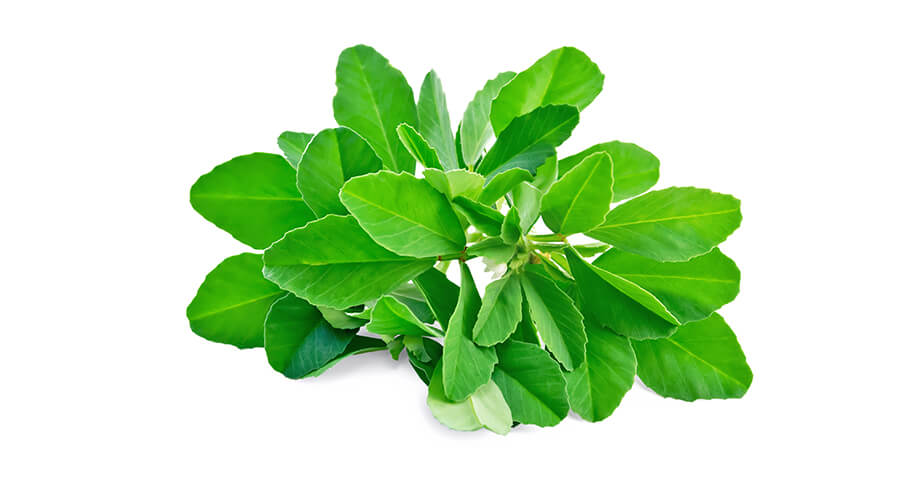 Fenugreek seed for the digestive tract

Fenugreek seed gruel is excellent natural support for diseases of the digestive tract. It has a protective effect on the mucous membranes. It reduces complaints even in the case of gastric and duodenal ulcers. The anti-ulcer properties of the polysaccharide fraction present in fenugreek seed result from the formation of a protective layer covering the gastric mucosa which counteracts the irritating effect of digestive juices and dietary constituents. Fenugreek seeds reduce the secretion of the enzyme pepsin and hydrochloric acid comparable to the popular drug omeprazole. Through their use, the congestion and swelling of the gastric mucosa are reduced.

Fenugreek not only has a protective effect but is also anti-inflammatory and antioxidant. It reduces inflammation of the stomach and intestines. The health-promoting properties of fenugreek in combination with honey have been proven in gastric and duodenal ulcers.

The diosgenin present in fenugreek seeds has been shown to inhibit the growth of colon cancer cells and activate their apoptosis (death). Fenugreek may be a dietary component to help prevent colorectal cancer.

Fenugreek seeds have a protective effect on the liver similar to that of silymarin. They reduce fat peroxidation and activate antioxidant enzymes in liver cells.

Other health uses of fenugreek seed

Fenugreek not only has an anti-diabetic and protective effect on the digestive tract. Scientific studies have revealed other benefits. For which illnesses can fenugreek seed be used?

Fenugreek seeds regulate lipid metabolism. They lower total cholesterol, LDL, "bad" cholesterol, VLDL, triglycerides, as well as ApoB - the main protein component of LDL. This effect is probably caused by the presence of sapogenins in fenugreek seeds, which stimulate bile secretion, enhance the metabolism of cholesterol to bile acids and cholesterol excretion. In addition, they inhibit the activity of lipases (enzymes that break down fat) and slow down the absorption of lipids into the blood. Fenugreek helps to block the accumulation of fat in cells and enhances the uptake of LDL from the blood. Vitamin B3 contained in fenugreek seeds, which has an anti-atherosclerotic effect, is also important for the cardiovascular system. 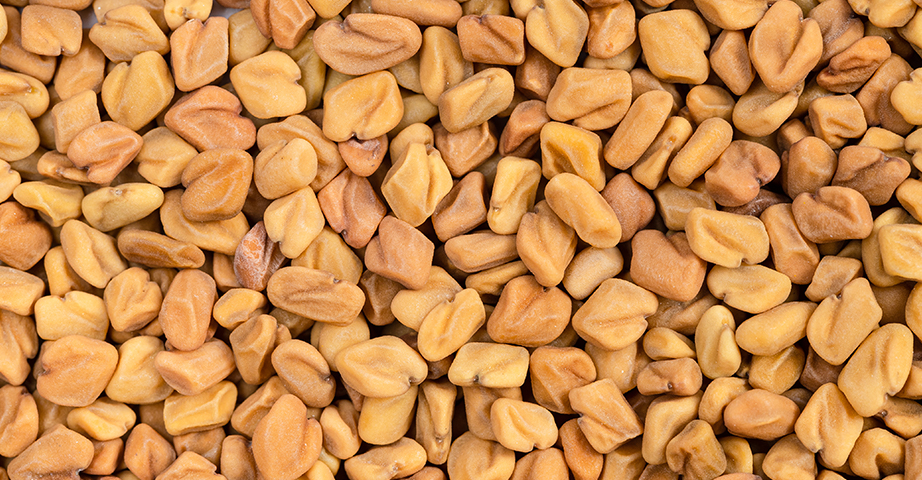 Fenugreek as an antibiotic

Fenugreek seed and the nervous system

Through the alkaloid trigonelline, fenugreek seed is capable of stimulating the regeneration of nerve cell axons and dendrites, promoting the formation of synapses which can lead to improved memory. There have been too few studies so far to be able to make a definitive assessment of the effectiveness of fenugreek on memory, but it has great potential as a plant for the prevention and combating of illnesses associated with senile dementia.

Fenugreek is an aphrodisiac, which has been confirmed by modern science. Taking 600 mg of fenugreek seed extract every day increases the sexual interest of healthy young women with low libido. A similar effect is observed among healthy young men and older men who lose sexual ability and interest in sex with age.