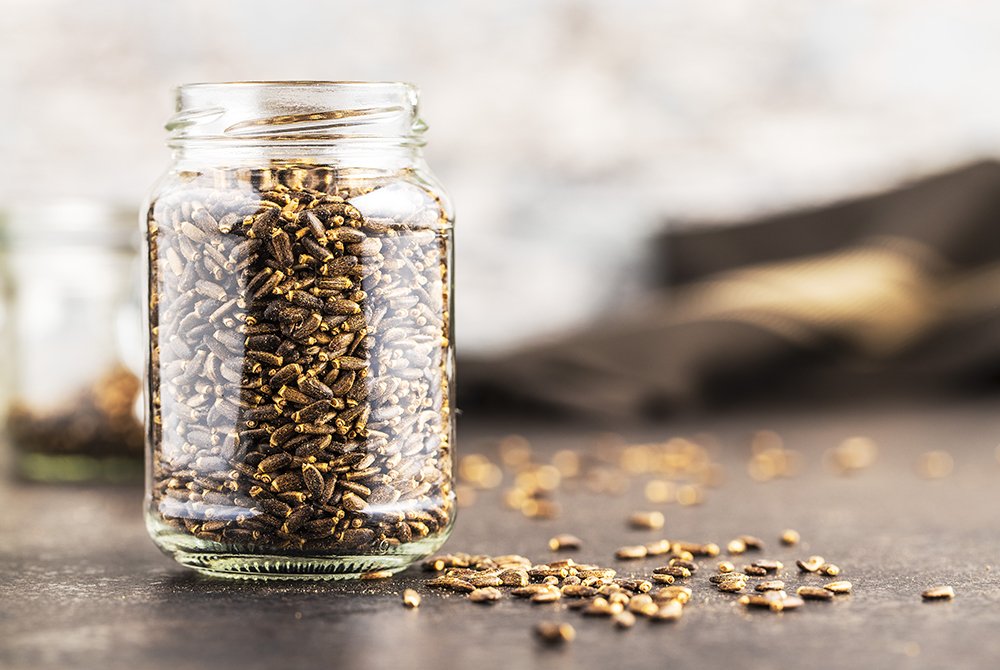 Milk thistle has been used as a healing plant for at least 2000 years. It is believed to be effective in a wide range of diseases. Is it true? What does it help? When might its use be dangerous?

What is milk thistle?

Milk thistle (Silybum marianum) is a plant that has been used in traditional medicine since ancient times. Its properties were first described by the Greek botanist Dioscorides in 40 AD. Thistle grows naturally in the Mediterranean area, Madeira, the Canary Islands, North Africa, India, Pakistan and also in Poland. It is one of the most important crops used in the pharmaceutical industry. It looks very similar to the common thistle. The plant grows to a height of up to 2 metres, has green or greenish-white leaves and purple or white flowers in the form of hanging baskets. The medicinal raw material extracted from milk thistle is its fruit leaves. In some regions, it is popular to eat thistle sprouts. Whole fruits, infusions of ground fruits and extracts of fruits and leaves are used in medicine.

Thistle as a medicinal plant is used by enthusiasts for almost everything from weight loss, to stimulating lactation among women who have difficulties with breastfeeding. What does milk thistle actually work for?

The characteristics and effects of milk thistle

The health-promoting properties of thistle result mainly from the presence of an active complex of flavon glycans, which are known together as "silymarin". It consists of silybin, silydianin, silychristin and taxifolin. The strongest action in the complex is shown by silybin. Milk thistle fruit contains 1-3% silymarin, including 0.26-0.36% taxifolin, 0.69-0.99% silydianin, 1.31-1.78% silybin and 0.27-0.39% isosilybin.

Apart from silymarin, thistle owes its properties and effects to the presence of quercetin, phytosterols, tannins, mucilages, organic acids, vitamins C, E and K, and fibre. In addition, it contains histamine and tyramine, which can cause allergic reactions. These components are found in not degreased fruits of thistle. Fruit and leaf extracts, on the other hand, contain mainly silymarin.

What does milk thistle help? Science has documented several actions of thistle, of which the protective and regenerative properties for the liver are considered the most certain.

Milk thistle for the liver

The characteristics of thistle are most often used as an auxiliary therapy for people with liver problems - alcoholic liver damage and inflammation, non-alcoholic steatosis of the liver, and even cancer. The benefits of thistle are used in protecting the liver from toxins, including potentially life-threatening ones. Studies suggest that taking thistle supplements reduces damage and improves liver function. The mechanisms of this activity are varied and include antioxidant, anti-inflammatory, antiviral processes, as well as inhibition of toxin entry into liver cells and fibrosis processes. Silymarin also operates at the RNA and DNA level, stimulating liver cell regeneration.

It is worth emphasising that silymarin does not have a biliary effect and does not increase bile flow.

Thistle has traditionally been used in the treatment of neurodegenerative diseases such as Alzheimer and Parkinson. The possible neuroprotective effect of thistle results from its antioxidant and anti-inflammatory activity. Both in vitro and animal studies have shown that silymarin prevents oxidative damage to brain cells, resulting in a possible reduction in the risk of nervous system diseases. It also decreases the number of amyloid plaques in the brains of animals with Alzheimer's disease. Amyloid plaques are sticky clusters of amyloid proteins that can accumulate between nerve cells with age. They are found in very high levels in the brains of people with Alzheimer's disease, meaning that milk thistle could potentially be used to treat the illness. 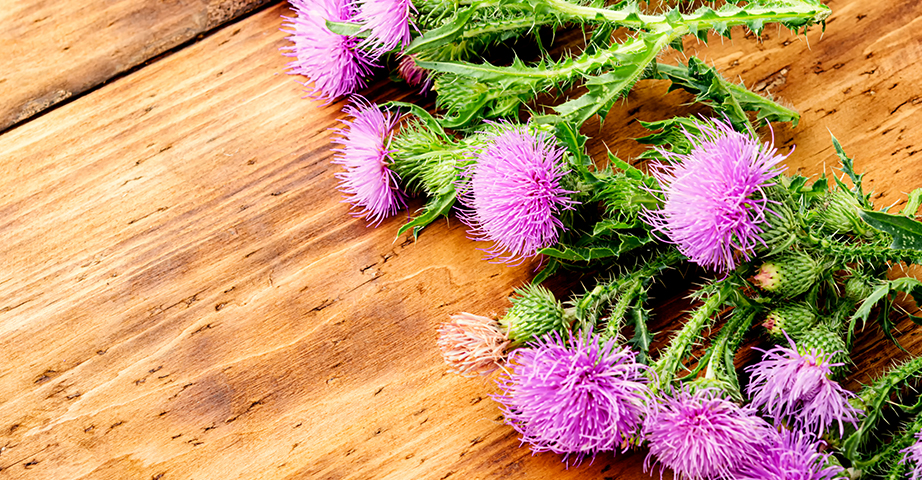 Other health-promoting effects of thistle

Most of the potential benefits of thistle have not been confirmed in a sufficient number of studies on humans. There are studies on animals and cell lines, but this is not enough to be able to state that thistle helps to treat medical conditions in humans. However, the extracts have a very high potential and over time, there may be more research analysing the effects of thistle on humans.

Properties and actions of milk thistle include:

Thistle - powder or tablets? Which should I choose?

Thistle is available in two forms - as milled, degreased fruit and as an extract standardised to contain silymarin. Tablets can contain both the fruit extract and the ground fruit in a capsule. It is essential to read the list of ingredients on the box and the leaflet to be sure what we are buying. Ground thistle can be found in so-called healthy food shops, BIO shops, large supermarkets, pharmacies and online shops. It is usually offered in packs ranging from 200 g to 1 kg. The larger the package, the less you will pay per kilogram.

If you decide to buy thistle tablets, it is better to choose those which contain a standardized fruit extract. The amount of silymarin in a single pill (single or daily dose) is what we can relate to its effectiveness and health-promoting effects. The dose of silymarin in a tablet of ground thistle is as difficult to estimate as buying ground thistle in a package. The content of silymarin in the fruit varies depending on the place and conditions under which the thistle is grown. Consequently, the health-promoting benefits are difficult to predict, and the cost of such tablets is much higher than the cost of buying a kilogramme of ground thistle fruit.

Thistle extract tablets are more reliable if you expect a concrete effect of silymarin (based on the right dosage and a properly chosen time of supplementation). Ground thistle, on the other hand, is a great addition to a daily diet that will support liver function and provide antioxidants.

How to use milk thistle?

Ground thistle can be used as a dietary supplement like other seeds and nuts. Ground thistle fruits are easy to include as part of meals such as muesli, oatmeal, yoghurt with bran, or grits with extras. They can be put on salads, added to bread pastes, soups and sauces.

Ground thistle can also be used as a herbal infusion. How to prepare it? Take one teaspoon of ground thistle, add it to a cup of hot water (not boiling water), stir, and let it stand for about 10 minutes. Cool the infusion and consume. When is it best to drink thistle infusion? Before or after a meal? According to the recommendations of the manufacturers, the thistle infusion should be drunk before a meal.

The dosage of thistle tablets used in scientific studies is usually between 200 and 600 mg of extract per day. Before taking a thistle supplement, it is best to read the dosage recommended by the manufacturer in the leaflet.

Milk thistle does not work for weight loss. It is not a fat burner or any of the well-known substances that support the weight loss process. By looking for reviews online, you will find claims of people who lost weight as a result of using thistle, but on the other hand, there are lots of negative opinions in this area. Thistle is neither a miracle weight-loss substance (because such do not exist), nor a real weight-loss aid. The only action that can be linked with supporting weight management, relates to increasing tissue sensitivity to insulin and lowering blood glucose levels on empty stomach. Better control of sugar metabolism is also essential for weight loss, but remember that to lose weight, the most important thing is correct calorie balance. 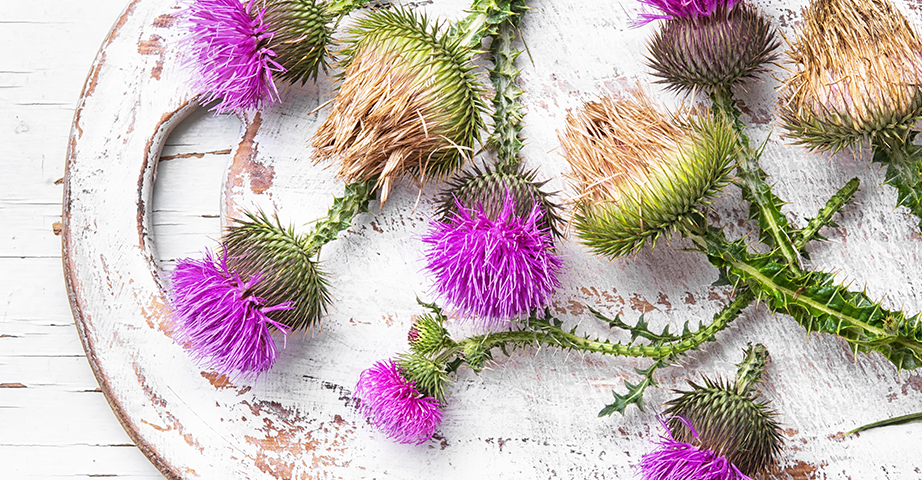 Taking milk thistle in tablets and powder is safe for most people. Side effects are rare and may include a feeling of fullness in the upper stomach, gas, nausea, diarrhoea and loss of appetite.

However, it is essential to know that milk thistle can cause side effects in certain conditions and diseases. It may trigger allergic reactions, especially in people sensitive to artichokes, kiwis, ragweed, daisies, marigolds and chrysanthemums. Due to its effect on estrogen, thistle should not be used by patients with estrogen-dependent diseases - endometriosis and certain cancers. People taking medicines to lower blood sugar levels must also approach supplementation with caution, as thistle can lower glucose levels and combined with drugs, lead to hypoglycemia.

Milk thistle interacts with many drugs that are metabolised in the liver. When taking regular medications, consult your doctor before starting thistle supplementation to find out if any of the products you are using is not converted to the active form or broken down in the liver. In addition, thistle increases the breakdown of estrogens, so it may reduce the effectiveness of estrogen-containing drugs.