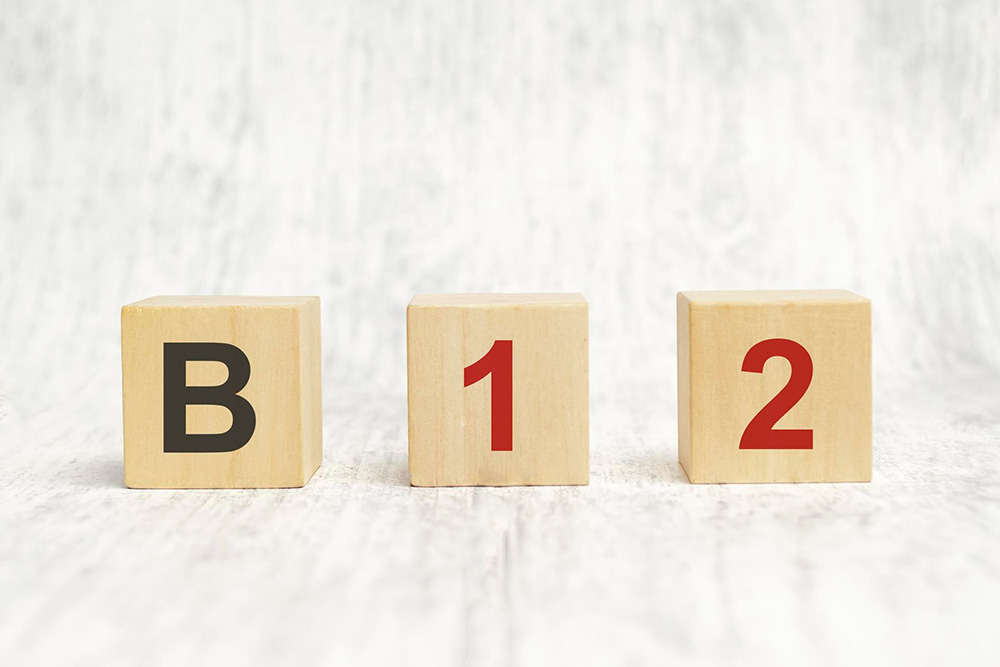 Vitamin B12 is one of the most important active ingredients supporting health. Its long-term deficiency can lead to numerous disorders that are very often misdiagnosed. It is for this reason that it is worth taking care of proper supplementation and focusing on a highly bioavailable form of this vitamin.

Vitamin B12, also known as cobalamin or red vitamin, is one of the basic nutrients needed for the proper functioning of the body. Vitamin B12 is called organometallic compound, which means that there are bonds between metal ions (in this case cobalt) with various molecules and anions.

The precursor of cobalamin research was T. Addison, who in the years 1849-1887 tried to find an answer to how to cure malignant anemia. His research was continued by other researchers, including J. Whipple, G. R. Minot, and W. Murphy, who discovered that eating large amounts of raw liver can treat anemia. In 1948, vitamin B12 was isolated by K. Folkers and its structure was described 8 years later by the British chemist D. Hodking.

For which vitamin B12 helps?

Vitamin B12 has many different functions in the body. Its most important tasks include supporting the work of the hematopoietic system. Cobalamin supports the production of red blood cells, their proper development, while protecting the body against anemia. It is also involved in DNA synthesis and can affect bone health. Research suggests that vitamin B12 may also improve mood, and its deficiency may in turn increase the risk of depression. Maintaining optimal levels of vitamin B12 can support cognitive skills, including memory and concentration.

Too low levels of cobalamin can lead to fertility problems as well as complications in the early stages of pregnancy. Vitamin B12 supports the development of the fetus and its deficiency at the beginning of pregnancy increases the risk of birth defects such as neural tube defects and may even lead to miscarriage.

In combination with other compounds, e.g. folic acid, cobalamin regulates the metabolism of homocysteine. Due to the fact that it lowers its level, it can protect the body against atherosclerosis and other heart diseases. Additionally, vitamin B12 can also support a beautiful appearance. Regular consumption of cobalamin prevents discoloration of the skin, nails, vitiligo and other symptomatic dermatological.

Vitamin B12 – where it occurs?

The natural sources of vitamin B12 are products of animal origin, e.g. meat, fish, seafood, eggs, milk and dairy products. Trace amounts of cobalamin are also found in mushrooms and some algae, e.g. in chlorella. Due to the fact that it is practically impossible to provide the optimal amount of vitamin B12 on a vegan diet, proper and regular supplementation plays a very important role. Interestingly, some vegan products available in stores contain vitamin B12. These are, for example, selected breakfast cereals or plant-based milk.

Forms of vitamin B12

Vitamin B12 is present in four different forms:

The first two, i.e. methylcobalamin and adenosylcobalamin, are naturally occurring coenzymes that can be found in foods. Cyanocobalamin, on the other hand, is a synthetic form of vitamin B12 that is most commonly found in supplements and fortified foods. In turn, hydroxocobalamin is a highly bioavailable natural form of vitamin B12, which is administered intravenously or intramuscularly. 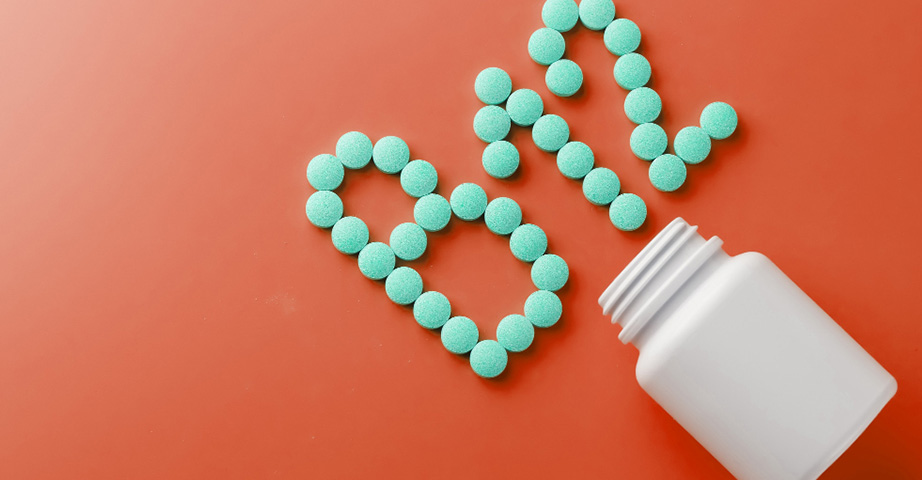 Methylcobalamin is characterized by high bioavailability, thanks to which it is easily absorbed by the body. This type of vitamin B12 occurs naturally in animal products such as meat, fish, eggs and dairy. It is a form that is stronger in action than vitamin B12 in the form of adenosylcobalamin.

Like methylcobalamin, it occurs naturally in nature. It works in synergy with methylcobalamin and makes up most of the liver stores. It is also known as mitochondrial vitamin B12 because participates in energy production processes. Adenosylcobalamin is a key component of the myelin sheath, and its job is to protect nerve cells.

In turn, hydroxocobalamin is produced by bacteria in the digestive tract when food is broken down. After delivery to the body it is converted into adenosylcobalamin and methylcobalamin. It is the only form of vitamin B12 available only on prescription.

Cyanocobalamin is an artificial form of vitamin B12 that is most commonly found in dietary supplements and fortified foods. It is not an active form, therefore it must be transformed in the body. It ensures the stability of the compound, therefore it works well in the production of vitamin preparations.

Vitamin B12 - which is the best digestible?

The majority of vitamin B12 dietary supplements available on the market contain methylcobalamin and cyanocobalamin. Cyanocobalamin is a synthetic form of vitamin B12 that does not occur in nature. Its greatest advantages include high stability and relatively low production costs. It is also resistant to sunlight, so it works very well in supplements in the form of tablets. It does not require special storage.

Due to the fact that cyanocobalamin is an inactive form of vitamin B12, it undergoes complex processes in the body that enable its activation. When cyanocobalamin enters the body, it is converted into methylcobalamin or adenosinecobalamin. Unfortunately, we never really know how much of the available cyanocobalamin pool will perform its biological functions.

Therefore, when it comes to certain effectiveness, methylcobalamin seems to be a much better choice here. This form is distinguished by easy digestibility and a much longer time of staying in the body. No energy is needed to activate it. Methylcobalamin is especially recommended for people whose vitamin B12 is not absorbed from food or transformed into active forms, e.g. in people with impaired digestive enzyme production.

Which vitamin B12 is the best?

Regular intake of supplements with vitamin B12 supports the work of two extremely important systems: the nervous and hematopoietic, and can also ensure a beautiful appearance. Although most of the preparations on the market contain vitamin B12 in the form of cyanocobalamin, methylcobalamin seems to be the more reasonable choice.. As already mentioned, this form of vitamin is biologically active, so the body does not have to convert it. However, it must be remembered that methylcobalamin should be stored away from sunlight.

The best vitamin B12 without a prescription

Apart from hydroxocobalamin, all other forms of vitamin B12 are available in the form of over-the-counter dietary supplements. If you want your supplement to be easily digestible and stay in the body for longer, choose a preparation with methylcobalamin.

If, in addition to vitamin B12, you also want to provide your body with other B vitamins, choose a complex vitamin complex. OstroVit dietary supplement Vitamin B Complex contains as many as 8 vitamins from the B group and additionally vitamins C and E.