Liquorice - health benefits and side effects 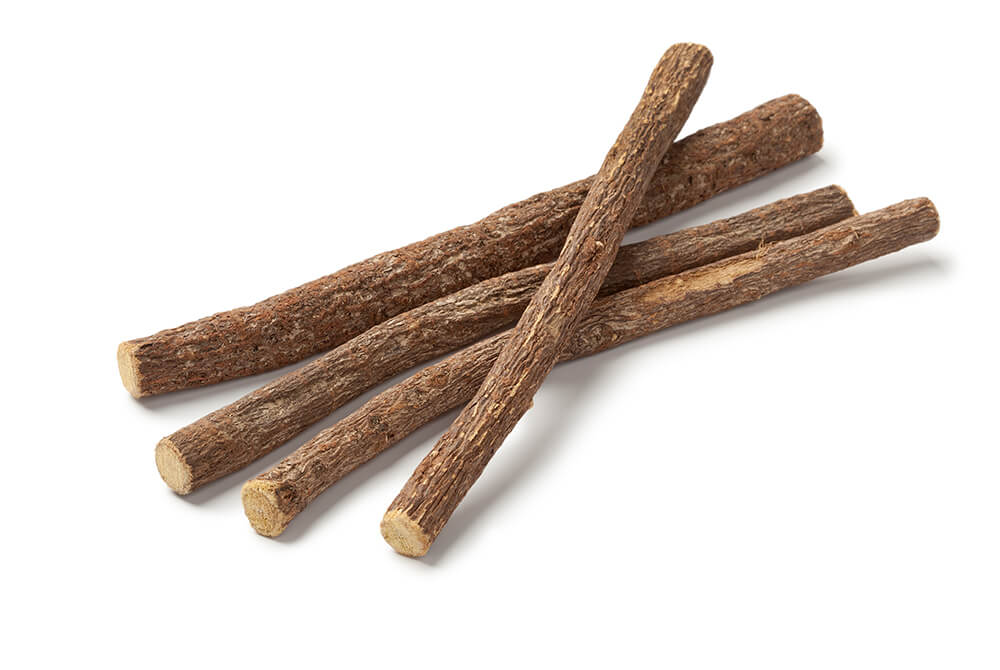 Liquorice is a popular herb in Europe. Its root is used as a health-promoting raw material. It is also very sweet, so the food and pharmaceutical industries benefit from it. What does liquorice help? What are its properties and side effects? Who is it harmful to?

Liquorice - what should you know about it?

Liquorice (Glycyrrhiza glabra) is a plant of the bean family, grows up to 1.5 m high and blooms in purple or lilac colour. Liquorice produces fruits in the form of pods, each containing 3-5 seeds. However, it is neither the flowers nor the fruit of liquorice that are important in herbal medicine, but the roots. They are collected in late autumn or early spring. They are extracted from 3-4 year old plants, debarked, washed and then dried at slightly higher temperatures.

Liquorice grows naturally in the Mediterranean countries - Spain, Italy, Greece and Turkey, as well as in Syria, Iran and South-West Asia. It is cultivated in many countries, including Poland. The spread of liquorice in Western and Central Europe was initiated by Benedictine monks in the 15th century.

The botanical name of liquorice Glycyrrhiza comes from the Greek words 'glykis'-sweet and 'rhiza' - root. All liquorice names in different languages emphasize its sweet taste. It is so sweet that there have even been attempts to replace cane sugar with it. It has a sweetness 60 times greater than sucrose.

Liquorice was used in medicine in ancient Greece, Rome, China and India. Traditionally, its role was to support:

Modern science is investigating the medicinal potential of liquorice. Its root does not seem to have such a wide-ranging effect, but it does present health-promoting properties in some diseases.

Apart from herbal medicine, liquorice is widely used in the food, pharmaceutical and cosmetics industries. Thanks to its sweet taste, liquorice is used in the production of sweets, drinks and to mask the unpleasant taste of medicines.

Where do the properties of liquorice come from - active substances

Liquorice roots contain bioactive phytochemicals from the groups of flavonoids (including liquiritin, rhamno liquiritin, liquiritigenin), saponins, polyphenols and volatile compounds which form a part of the essential oils. The most important component of liquorice is a saponin called glycyrrhizin. Its activity and mechanism of action as well as the presence of glycyrrhizin, which is attributed to the properties of liquorice, is the subject of most research. In humans, glycyrrhizin can be metabolised and converted to glycyrrhetinic acid and therefore the pharmacological action of glycyrrhizin is similar to that of glycyrrhetinic acid. Glycyrrhizin is also largely responsible for the side effects of liquorice.

Licorice's mechanisms of action are based on its anti-inflammatory, antioxidant, antiviral, anti-aggregation and hepatoprotective properties. 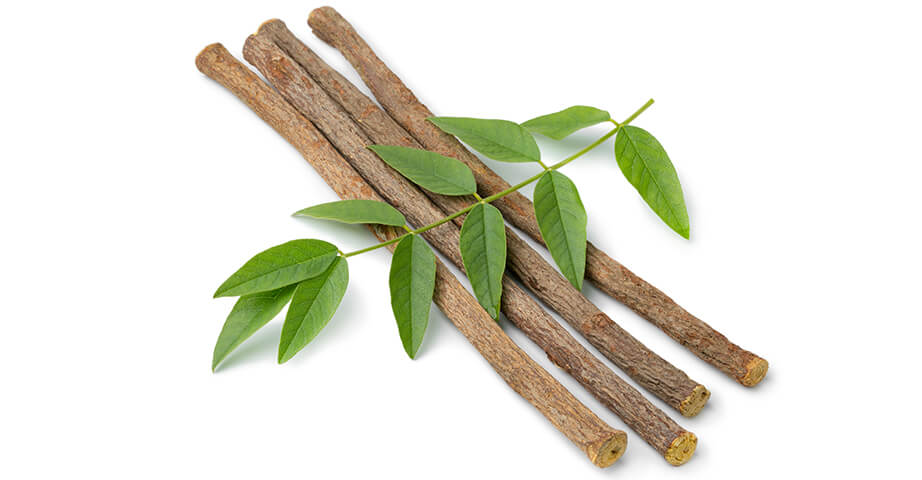 Liquorice root has scientifically proven benefits, mainly in the gastrointestinal tract, in upper respiratory tract infections as well as in various viral and bacterial infections.

Liquorice root for a runny nose and cough

Due to the presence of glycyrrhizin, liquorice root has a significant secretolytic (secretion thinning), expectorant, antimicrobial and, as a result of flavonoid compounds, relaxant effect on bronchial smooth muscles. These scientifically proven properties explain the efficiency of liquorice use in upper respiratory tract infections, runny nose and cough.

Effects of liquorice on the digestive system

Anti-inflammatory properties of liquorice are caused by increased glucocorticosteroid secretion, influence on the metabolism of arachidonic acid known for its pro-inflammatory effects, inhibition of prostaglandin E2 synthesis and ability to suppress phospholipase A activity. These mechanisms make liquorice have immunosuppressive activity, anti-inflammatory effects on the gastrointestinal mucosa as well as accelerate the healing process of gastric and duodenal ulcers. Accelerated recovery of the gastrointestinal mucosa was reported with the use of the liquorice root extracts, but not the liquorice tea. Drinking the tea, on the other hand, was sufficient to reduce hydrochloric acid secretion in the stomach by 50% in 15 days. It may be significant for people with excessive hydrochloric acid production and an upset stomach. However, for people with normal secretion, it may pose a risk of hydrochloric acid deficiency and impaired protein digestion. Small studies with humans have shown that taking liquorice extracts may have a therapeutic effect on reflux and heartburn

Studies involving rats have noted that liquorice extracts increase pancreatic secretion and may have a protective effect on liver cells after carbon tetrachloride poisoning. They may also be a treatment strategy for hepatitis C.

Antiviral and antibacterial properties of liquorice

Liquorice root has been proven to reduce the growth of various RNA and DNA viruses such as herpes simplex, herpes zoster, human immunodeficiency virus (HIV) as well as hepatitis B and C. It also has anti-bacterial activity against pathogenic bacteria, including Staphylococcus aureus (a staphylococcus aureus often found in people' throats), and E. coli (a cause of food poisoning and skin problems). One study involving 120 people showed promising conclusions - after 2 weeks of using liquorice in combination with classical therapy, the level of Helicobacter pylori bacteria was noticeably lower than when administering antibiotic therapy alone. Eradication of Helicobacter pylori is very difficult and often ineffective, so any method that increases the number of killed bacteria is valuable.

The antibacterial activity of liquorice root is used to treat skin infections and acne. For this purpose, compresses are applied directly to the skin.

Furthermore, liquorice has an anti-caries effect. Tooth decay is caused by the presence of Streptococcus mutans bacteria and liquorice root shows antimicrobial action against them. It was observed in a study in which sugar-free lollipops containing 15 mg of liquorice root were given to children twice a week for 3 weeks. 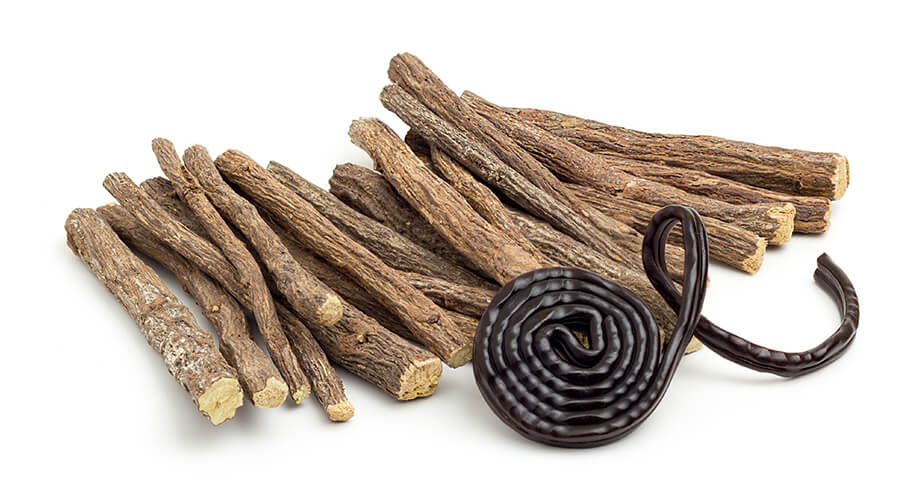 Liquorice root - contraindications and side effects

Long-term use of liquorice root and exceeding the permitted dosage causes side effects. These include:

Liquorice root is prohibited to use among people suffering from a liver disease involving cholestasis, cirrhosis and kidney failure. Its intake is also not recommended during pregnancy and breastfeeding. One study has shown that consumption of liquorice can affect foetal brain development and impair cognitive abilities in later life. Hormonal contraception increases sensitivity to glycyrrhizin and is also a contraindication to the use of liquorice root. Liquorice interacts with drugs or causes similar reactions to some of them. Therefore, it should not be used while taking potassium-lowering agents, having low blood potassium levels, treating hypertension, undergoing hormone therapy, taking corticosteroids as well as diuretics that regulate heart rhythm or blood thinners.

How to use liquorice?

Liquorice is available as chewable tablets, liquid root extract, capsules, root grounded into powder and dried root in larger pieces. Liquorice can be used in various ways for health purposes. Mixed ground root with aloe vera gel is recommended for use on the skin. For sore throats, coughs and runny noses, you can prepare a decoction of the root ( mix pieces of liquorice root with hot water and leave it covered for a few minutes). This form of serving is often called liquorice tea, although it is not tea. However, herbal teas with added liquorice are available in herbal shops. In contrast, extracts of the root are added to drinks or taken under the tongue.

It is important to remember that the use of liquorice is not completely safe and can cause serious side effects. On your own, do not use liquorice in any form for more than 4-6 weeks.