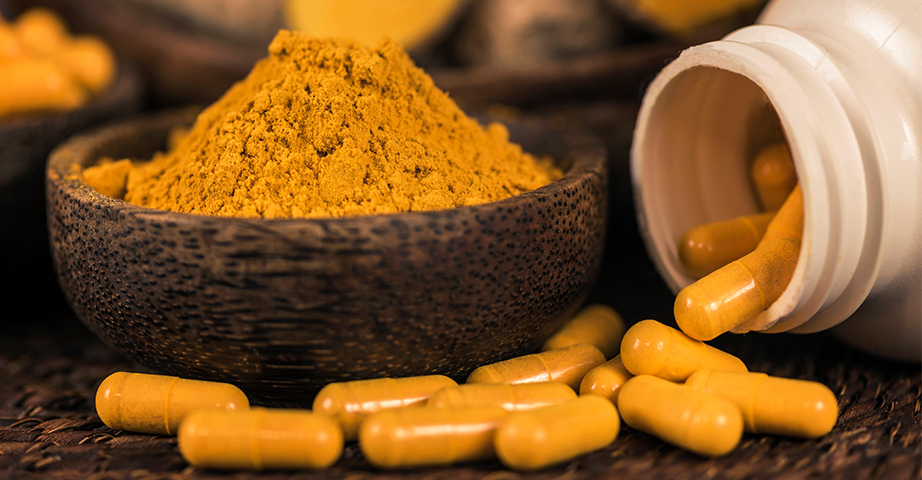 Turmeric is a spice that has been known in Asia for thousands of years. It is an essential ingredient of Indian curry and an equally crucial raw material in Indian Ayurveda - traditional medicine. In Europe, for hundreds of years, it was used mainly as a natural dye. In the late 20th century, turmeric began to attract the interest of herbalists and phytotherapists. Currently, there is a lot of scientific research on its properties. What is the effect of turmeric? In which diseases should it be used? Does turmeric help to lose weight? We explain!

Turmeric (Curcuma longa) is a plant from the ginger family found in equatorial areas, mainly in South Asia. It is grown in Bangladesh, China, Taiwan, Sri Lanka, the West Indies, Java, Australia and Peru. At the same time, turmeric is a highly valued spice, dye and (perhaps above all) herbal raw material with numerous applications in traditional Ayurvedic medicine. The usable part of the plant is the turmeric rhizome. Turmeric has been known for at least 4000 years. It was originally used as a dye and spice. Over the centuries, its healing properties have gradually been discovered. Turmeric is one of the cheapest spices. It is many times cheaper than saffron, and thanks to its similar colouring properties, it is sometimes used instead. However, they have completely different taste qualities. As a dye and spice, turmeric is an integral part of Indian curries, Middle Eastern cuisine and Arabian dishes in North Africa. It is also used to colour butter, cheese and other foods which are given a yellow colour.

In Indian Ayurveda, turmeric is considered to be strengthening and warming. Traditional uses of turmeric include improving digestion, a proliferation of good intestinal microbiota, elimination of parasites, elimination of flatulence, cleansing and strengthening the liver and gall bladder, regulating menstruation, relieving arthritis, reducing swelling, purifying blood, warming and promoting proper metabolism, relieving coughs and asthma as well as antibacterial and antifungal use, strengthening the body in any weakened state. Moreover, it is used for sprains, burns, cuts, bruises, insect bites and itching. In ancient India and Hawaii, turmeric rhizomes were used for medicinal purposes. Ancient Hawaiians used turmeric, among other things, to prevent and treat sinus infections because of its tightening and mucus-removing effects, in ear infections and to treat stomach and duodenal ulcers.

Anti-inflammatory and antioxidant properties of turmeric

Chronic inflammatory conditions of low intensity are a common problem in modern societies. They lead to cancer, metabolic syndrome, cardiovascular and neurodegenerative diseases. Scientific studies show that curcumin from turmeric has strong anti-inflammatory effects and may be used in the treatment of rheumatoid arthritis, inflammatory bowel disease and atherosclerosis. The characteristics of turmeric are manifested by reduction of pro-inflammatory prostaglandin E2, interleukin-6 and inhibition of NF-κB transcription factor activity.

Curcumin has been shown to have strong antioxidant properties. It inhibits the action of free oxygen radicals, which are chemically active molecules that cause damage to the body's cell structures (proteins, DNA, cell membrane lipids). So far, scientific studies have proven that curcumin blocks the action of free radicals and activates other antioxidants.

Most of the medicinal benefits of turmeric are based on its anti-inflammatory and antioxidant properties. Their mechanisms are not well understood and are the subject of scientific research.

According to Ayurvedic medicine, turmeric has numerous health-promoting effects. What does modern science say about it? What does turmeric help?

Turmeric stimulates bile flow. This effect is mainly due to the presence of essential oil and flavonoids. They cause contraction of the gallbladder and consequently increase its emptying. The choleretic effect of turmeric increases the body's ability to digest fat. Adding it to the diet prevents indigestion after a fatty and heavy meal. Turmeric has also been shown to have anti-hepatotoxic properties similar to other liver-protective herbs such as milk thistle and liquorice. Its efficacy is compared with that of silymarin. Sodium curcuminate, the salt of curcumin, increases the excretion of bile salts, cholesterol and bilirubin with bile and also increases their solubility in bile, making it possibly the prevention and treatment of gallstones. Turmeric can be used as a supportive medicine in the treatment of hepatitis, cirrhosis and jaundice. It has also been found to have a carminative effect. It is recommended for people who suffer from frequent flatulence and gas retention. It is worth adding this spice into dishes containing leguminous seeds to avoid bloating after a meal.

Turmeric may be crucial in the treatment of gastric and duodenal ulcers, along with any damage to the mucosa of the digestive tract. It has been shown to have an effect in inhibiting ulcer formation caused by stress, alcohol, indomethacin and reserpine. It was caused by increasing the amount of mucus in the stomach wall. Turmeric is also known to inhibit intestinal contraction and enhance the secretion of digestive enzymes, along with having a therapeutic effect on pancreatitis.

Turmeric has antimicrobial properties. It inhibits the growth of various pathogenic bacteria, fungi and parasites. For this reason, it can be helpful for wound applications but also taken orally in gastrointestinal infections, including the detection of parasites. 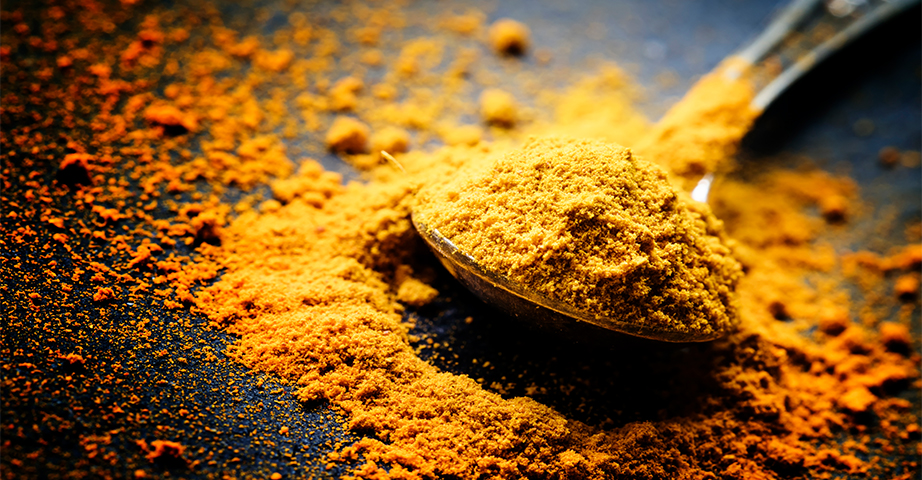 Scientists have found that many common diseases of the brain and nervous system are accompanied by a deficiency of BDNF - brain-derived neurotrophic factor. It is a gene involved in the protein production responsible for the neurons' survival. Insufficient BDNF levels are observed in Alzheimer's disease and depression. Animal studies show that curcumin has the effect of increasing the level of proteins produced with BDNF in the brain. Inflammation and oxidative damage are known to play a role in Alzheimer's disease, and curcumin has both anti-inflammatory and antioxidant properties. Furthermore, a key feature of Alzheimer's disease is the accumulation of proteins called amyloid plaques. Animal studies show that curcumin can help remove these plaques. However, there is a lack of human studies to state conclusively that curcumin has therapeutic properties in nervous system diseases.

Changes caused by free radicals combined with low-grade chronic inflammation are a key factor leading to cardiovascular disease. It is believed that curcumin may play a role in the prevention of heart disease. Apart from its antioxidant properties, curcumin has also been shown to lower cholesterol and triglyceride levels in people at risk of heart disease and may regulate blood pressure. It also reduces the accumulation of atherosclerotic plaque.

Numerous animal and cell line studies have analysed the effects of curcumin on cancer. Many of these have shown that it can affect cancer formation, growth and development at the molecular level. Researches imply the protective and therapeutic properties of turmeric curcumin. It is also speculated that it may reduce the spread of cancer, contribute to the death of cancer cells in various cancers and reduce the side effects of chemotherapy. 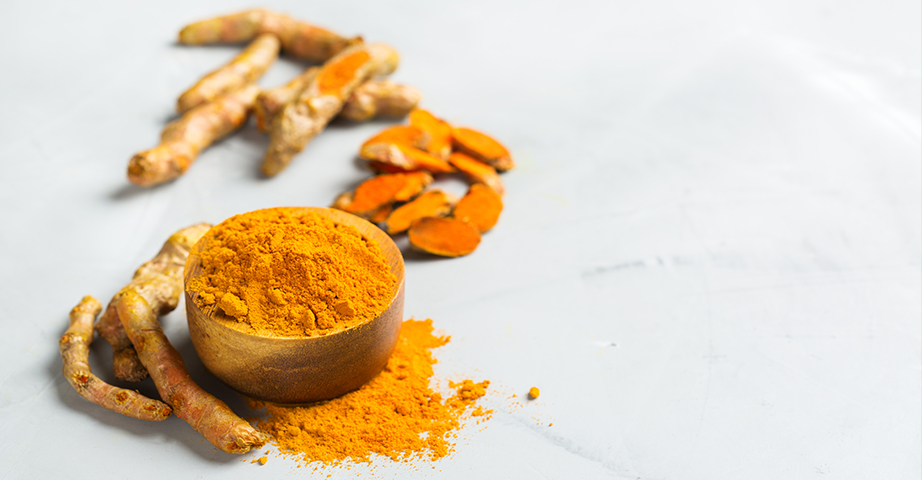 Does turmeric have slimming properties?

The curcumin in turmeric has been shown to have slimming properties. Scientific studies, including a large meta-analysis of studies involving human subjects, have proven that curcumin in high doses causes a decrease in body weight, waist circumference and levels of hormones associated with hunger - leptin and adiponectin. Additionally, turmeric's ancillary effect on weight loss may be to increase cell sensitivity to insulin.

However, it is important to note that the curcumin isolated from turmeric, not the turmeric itself, has weight loss properties. To achieve a slimming effect, it is necessary to take at least 500 mg of pure curcumin per day (accompanied by piperine to increase its absorption). In some studies, up to 2000 mg of curcumin was given to participants. To absorb these amounts of active ingredients from turmeric, you would need to consume between 17g and 68g of turmeric powder per day. Therefore, you should not expect that drinking water with turmeric will help you lose weight. There is usually 2-3 g of turmeric in one glass of such a drink, which gives 60-90 mg of curcumin. Expecting slimming properties, it is best to choose a dietary supplement with a high dose of curcumin with piperine.

Turmeric root looks very similar to ginger root but is less fibrous, easier to chew, crunchy and juicy. The fresh root has a slightly sweet and nutty taste, with a bitter note. It can be sliced, grated or grounded. Fresh turmeric root is a very strong dye, so while preparing dishes with its addition, it is best to use disposable gloves and be very careful with clothes, because turmeric stains are hard to get rid of. In Poland, turmeric root is hardly available. Definitely more common is turmeric powder, which you can get in every shop.

Turmeric root or turmeric powder can be used on a daily basis as a side dish. However, curcumin - the best-researched active ingredient in turmeric, which is attributed with numerous healing properties - represents only 3% of dry weight in turmeric, while the amounts of curcumin used in scientific studies sometimes exceed 1 g per day. Obtaining this amount of curcumin from turmeric root or powder is almost impossible. If the aim is to provide concentrated curcumin, then it is better to rely on turmeric extract tablets. However, for preventive purposes, it is advisable to choose fresh turmeric root or spice as a dietary source of the health-promoting substance.

Turmeric tablets are available as both encapsulated turmeric powder and turmeric extract standardised for curcuminoid content. Good turmeric tablets are the second ones, where you know exactly how much curcumin is in a single dose of the supplement. Buying powdered turmeric in tablets is a waste of money, as the capsule contains the same thing as a packet of turmeric as a spice. Turmeric tablets should contain curcumin and piperine. Curcumin is very poorly absorbed from the digestive tract and piperine significantly improves its bioavailability. According to some reports, the absorption of curcumin in the presence of piperine increases by as much as 2000%!

How to use turmeric?

Turmeric can be eaten by using it as an everyday side dish. A very popular way to consume turmeric is a drink called liquid gold. How much turmeric to take per day depends on the reason for using it and the desired effect. The dosage of turmeric can vary, but it is usually in relatively large amounts, several grams per day.

How to use turmeric medicinally - dosage

Anti-inflammatory and antioxidant– 500 mg of curcumin per day

In rheumatoid arthritis – 0.5-1 g of turmeric powder 3 times a day