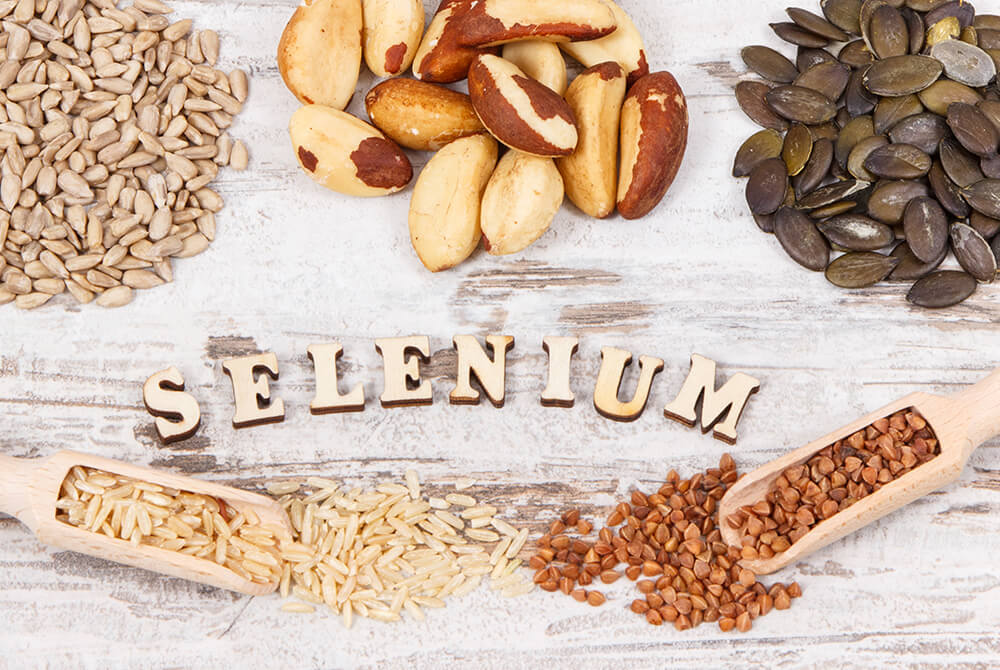 Selenium is a trace element included in many enzymes. It has antioxidant and anti-inflammatory properties, so it prevents inflammatory and autoimmune diseases. Selenium is particularly important in thyroid diseases. What health properties does it have? In which food should you look for selenium? When can selenium be toxic? Can it be supplemented? We clarify any doubts

Selenium is a trace element essential for the proper functioning of the human body due to having antioxidant and anti-inflammatory properties. It participates in metabolic processes at the cellular level and is a component of many oxidoreductive enzymes (involved in oxidation-reduction processes), the most important of which are glutathione peroxidase, thioredoxin reductase, and enzymes that enable the conversion of the inactive thyroid hormone T4 to its active form - T3. he role of selenium is protecting cell membranes from damage by free radicals and regenerating antioxidants that have been oxidised. It allows them to continue their protective function for cell structures, proteins and DNA. A crucial function of selenium is the metabolism of thyroid hormones. Furthermore, it is involved in the functioning of the immune system, fertility and muscle development.

The requirement for selenium in adult women and men is set at 55 μg/day. The amount of the element needed for proper functioning increases during pregnancy to 60 μg/day and during breastfeeding to 70 μg/day.

Effects of selenium excess and deficiency

Selenium supplementation receives little attention and is strongly discouraged as a preventive measure. Why? Because there is a thin line between a beneficial and toxic amount. If selenium is not taken according to recommendations, it is easy to overdose on this element. At the same time, the effects of selenium deficiency are very serious and cannot be ignored.

The classic examples of selenium deficiency diseases are Hypertrophic cardiomyopathy (Keshan disease) and Cartilage dystrophy (Kashin-Back disease), which occur only in parts of China where soils are very poor in selenium. In areas where the selenium content of soils is low, mortality from cardiovascular disease and cancer is higher. Low selenium levels are noticed among people who suffer from AIDS, vascular disease, acute pancreatitis, phenylketonuria, cystic fibrosis, rheumatoid arthritis, retinopathy, kidney failure and autoimmune diseases.

An excess of selenium is manifested by brittleness and loss of nails and hair. With chronic selenium excess in the body, symptoms of depression, nervousness, emotional instability, gastrointestinal disorders, skin rashes, nervous system disorders, garlic-scented breath and sweat may occur. High consumption of selenium causes selenosis, which can affect people exposed to selenium intakes of 1000 µg per day or more. However, selenium poisoning or selenosis is very rare. Toxic levels of selenium in the body can also be brought about by taking gram doses of the element at a time.

Currently, 400 µg is considered a non-toxic daily dose that does not cause the effects of selenium excess. Therefore, it seems that with rational supplementation, there is no need to be concerned about selenium toxicity.

Selenium properties and the thyroid gland

Thyroid diseases are a widespread issue in the modern world. These days, probably everyone is close to a woman (women get the disease much more often than men, but that doesn't mean that thyroid disorders don't affect men) suffering from hypothyroidism or Hashimoto's. Selenium may have a vital role in their treatment, but taking selenium is strongly discouraged by some doctors due to potential toxicity. The choice of selenium supplementation in thyroid disease is up to each individual and should be discussed with the specialist. However, scientific publications clearly indicate that the properties of selenium may be beneficial in the treatment of thyroid disease, especially the autoimmune form, Hashimoto's.

Selenium is a component of the enzymes converting the inactive form of the thyroid hormone T4 to the active form - T3. It suggests that the inefficient conversion at least to some extent is caused by selenium deficiency in the body.With selenium deficiency, taking T4-containing drugs (euthyrox, letrox) may not improve health and well-being at all, because despite increasing T4 concentration in the body, conversion is not occurring.Hence we do not feel the positive effects of the treatment. The result of the blood analysis is as follows - with each test, the T4 level increases, while the T3 level remains similar or increases slightly.

The second issue, directly connected to the treatment of Hashimoto's or autoimmune thyroiditis, which over time leads to hypothyroidism, relates to the antioxidant and anti-inflammatory properties of selenium. Numerous studies show that supplementation with organic selenium (selenomethionine) at a dose of 200 μg for a period of 3 months to a year causes a decrease in the level of anti-TPO antibodies (characteristic of Hashimoto's disease) by 30-40%. There is also an improvement in the USG image of the thyroid gland.

Selenium also has protective qualities for thyroid tissue. It is a component of proteins that protect the thyroid from hydrogen peroxide damage. Hydrogen peroxide is produced during the formation of thyroid hormones, but it is an oxidant that in excess causes inflammatory changes. According to one theory, the changes caused by hydrogen peroxide may be the first stage of autoimmune thyroiditis, as the immune system recognises these damaged tissues as an intruder and begins to attack them.

Studies involving people with thyroid disease show that daily supplementation with 200 μg of organic selenium even for up to a year is not toxic to the body. The beneficial properties of selenium for thyroid patients may be far more valuable than the potential risk of taking a toxic dose. Especially if the patient lives in areas where soils are poor in selenium and their diet is not rich in foods that are good sources of it. To avoid the risk of selenium overdose, some experts recommend selenium supplementation for a month and then taking a one-month break.

Selenium - properties and role in diseases

Selenium causes a decrease in the production of prostaglandins, prostacyclins, thromboxanes and leukotrienes - all markers of inflammation. It also reduces the inflammatory response by inhibiting TLR4 or TNF-α mediated activation. This is how selenium's anti-inflammatory properties manifest themselves. In addition, selenium intake reduces CRP levels (acute phase protein, the most commonly studied indicator of inflammation) in people with heart disease. Selenoproteins reduce inflammation in inflammatory bowel diseases, and their deficiencies have been linked to a higher risk of colorectal cancer. An analysis of 69 studies involving 350,000 people found that high blood selenium levels are associated with a lower risk of breast, lung, colorectal and prostate cancer. The exact mechanisms responsible for selenium's anti-cancer effects are still being investigated. It is known for sure that numerous selenoproteins are involved and that selenium's anti-inflammatory properties are the basis for prevention.

Selenium has an anti-inflammatory and antioxidant effect, so it is significant in reducing the risk of atherosclerosis. Atherosclerotic plaques are formed precisely as a result of fat oxidation to build up damage to blood vessels caused by inflammation. On the other hand, it can lead to ischaemic disease, heart attack and stroke.

Another disease that may be prevented with selenium is Alzheimer's disease. People with this condition have low levels of selenium in their blood, and some studies have found that selenium administration improves memory. In addition, the Mediterranean diet, which is naturally rich in selenium due to a large amount of seafood and nuts, has been linked to a lower risk of Alzheimer's disease.

Organic selenium is the form of selenium found in combinations with organic compounds - amino acids naturally present in nature. Organic selenium is available in food as selenomethionine and selenocysteine; incorporated into proteins, which are collectively called selenoproteins. The bioavailability of the element in its organic form is always much higher than in its inorganic form (inorganic salts and oxides), as the human body is made up of organic structures, so we are adapted to metabolising such combinations. The bioavailability of organic selenium is high - more than 90%, and increases with selenium deficiency. The absorption of selenium is also positively influenced by the presence of protein, vitamins A, C and E, and other antioxidants.

Sources of selenium in food

The global intake of selenium varies significantly among regions. It is highest in areas with selenium-rich soils - Venezuela, parts of China and India. In most countries in Asia, South America and Africa, the intake of selenium sources in food is too low to meet the body's needs. However, even in Europe, where access to food is very easy, selenium deficiency is a problem, especially among women. In Poland, the average woman's dietary intake of selenium is 37.9 μg per day and 62.2 μg in men.

The absorption of selenium from food is high. It is over 80% from cereal products and over 90% from meat, fish and seafood. An exception among fish is tuna. It varies from 20 to 60% mainly due to the presence of selenium in the form of inorganic salts. 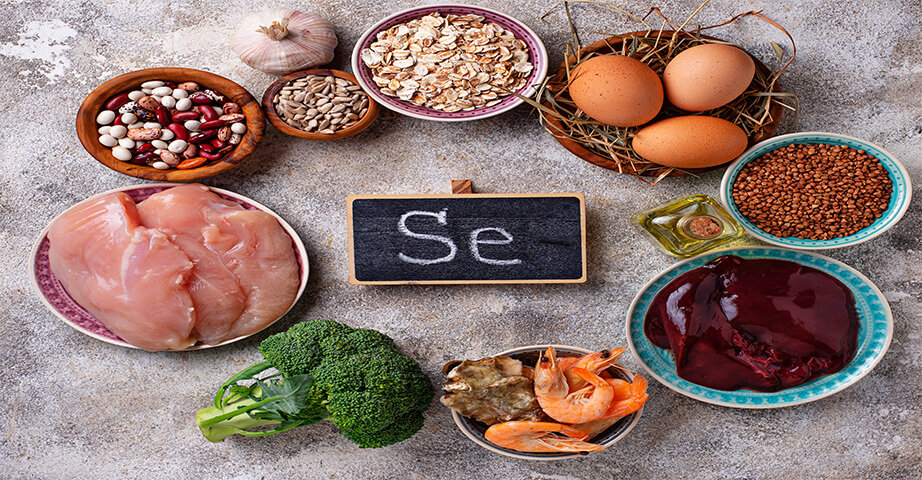